page last updated 22 June 2020 This is a work in progress. Let me know if anything is missing.

* If absolutely necessary, you may mix the two Burnin' Leos at the bottom of the cannon room in Revenge of Meta Knight and discard the ability immediately afterwards (see the final Note below).

My personal route for the Milky Way Wishes subgame is as follows (this is also in the LiveSplit file below):

Config for randomizer (USE THIS): 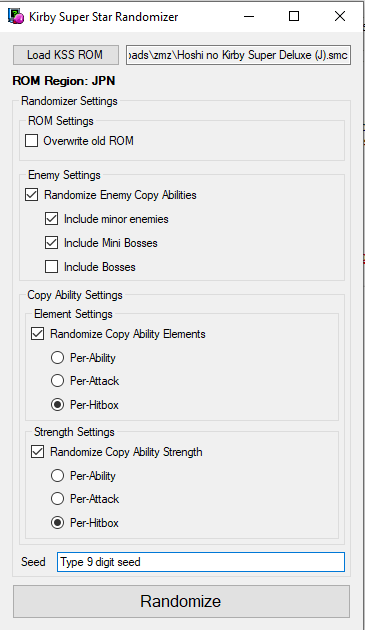 The file below contains an updated version of the LiveSplit subsplit configs that I used in the above video. It should also include my best segments from my most recent PB which clocked at 1:13:17, as streamed on Twitch (although network errors caused it do divide into two streams, which I don't want to have to deal with at the moment), but you can clear those and start fresh. "Marx" is the end of RTA timing (see rule #5).
Kirby Super Star randomizer - Any% [Sub].lss | Google Drive link